Our Beacon of Light: Baby Bargains

Furniture, cribs, changers, diapers, pak n plays, clothes, bottles, car seats, bumpers, gliders, breast pumps, pacifiers and carriers. The list goes on and on. Kiana and I were recommended a great book called Baby Bargains by our neighbor who had just had her second child a few months prior. We were out on one of our weekend shopping adventures when I told Kiana that we should stop at the book store and pick up a copy. We found it in Barnes and Noble and purchased it, along with a nice baby book for Ella. For the record, it's not a small book.

In short order, Kiana destroyed this thick beast of a consumer product baby bible. I was completely in awe. (Reading frightens me, let alone reading about millions of baby products) Kiana was reading reviews and digging for the best values like she was on a quest for the grail. This book actually became our most valuable resource, a beacon of light navigating us through the mystic black hole of baby products. And believe me, the closer you get to this black hole the larger it gets.

I'm confident that we have purchased the safest, most sensible for the money, products money can buy. All thanks to this book. I recommend all rookie parents pick it up prior to starting the product purchasing journey for your newborn. It was great peace of mind for us.
By: Unknown No comments:

While all the pregnancy websites will tell you that your baby has by now fallen into a routine of sleep and being awake, I don't think Ella is trying to follow any rules.

She is completely random - sometimes she will be extremely active in the morning or the evening and sometimes I'll barely feel her except for a few pokes sporadically through the day. My coworker's wife told me that the motion of walking around lulls the baby to sleep, so when you finally rest (in bed, on the couch, sitting still for a while), she wakes and starts moving around. It made sense to me and I feel like that is the only semblance of a routine she has!

We went to the pool with my sister-in-law, Vicky and her 3 sons: Nate, 6, Troy, 3 and Achilles, 1 this past Sunday at the start of my 28th week. While swimming, jumping and swirling in the pool with Troy he told me numerous times that I was fat. He knows I'm pregnant and that his baby cousin is in my belly, but he thought it was funny to just call me fat. Unusually, I really do think he understands the difference, especially since his own mom has been pregnant around him before. He was on my hip in the pool and after some swirling around and simple conversation he said with a giggle, "And why are these so big?" pointing to my boob closest to him. This made it official that EVERYONE has noticed how large I've gotten. So I told him it's because they have milk for the baby and that seemed to be a satisfactory (almost true) answer.

We're also making progress on Ella's nursery. We've gotten the crib and glider (and the glider was 50% off, woohoo!) The dresser came in with the crib, but there was a gash in it so we had to reorder. It should be in this weekend and that should be it for the furniture except possibly a thin bookcase. 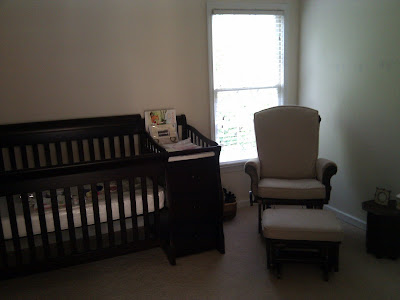 Not much to show yet, but we've gotten all the decorations, including curtains and are just waiting to paint first before putting everything up. We just narrowed down our paint options on Sunday and although I thought we'd go neutral, I think we'll end up with a soothing green color. It matches well with the decor and looks great against the dark wood.

We're making little updates to the guest bathroom as well which will technically be hers now. It's black and white and we'll be painting the walls gray - pictures to come of the hardware improvements.

Even though it still feels like we have so long to go, there's still a lot to do! (I suppose I'll probably feel that way until we're driving to the hospital to deliver.)
By: Kiana No comments: