I'm very behind on recapping our Atlanta Baby Shower...it was such a nice get together with all our friends here. Our good friends Mary, Bree and Lauren hosted at Mary and Jason's house on August 6.

There was a great spread of food. And the little candy boxes for favors were adorable. The glasses they stood on were lit from the inside.

There was also some baby food on another counter for people to try and guess what flavors they were. There weren't many people willing to participate haha, but of those who did, no one got all of them right.

We all just hung out and chatted which was great because we had been very busy lately and hadn't seen everyone in a long while. Vicky, Philip's sister, came with our 3 nephews as well.

While hanging out in the living room, there were blank white bibs and paint set out for people to create their own designs. We definitely do not have a shortage of bibs now! Some of the designs were super clever and cute.

Also in the living room, there was a calendar made by Mary for everyone to guess Ella's birthday, whether it will be the AM or PM when she's born and how much she will weigh in pounds and ounces. 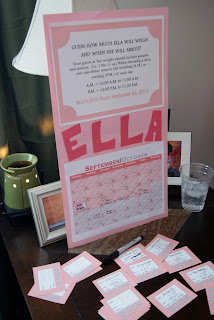 After a while, we got to opening presents. We were blown away by everyone's generosity...and their good taste in clothing! 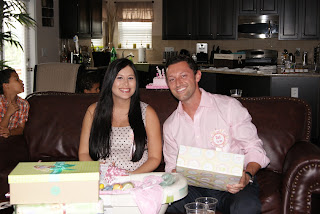 After presents, it was onto the beautiful cake! It was a delicious Publix cake, but Bree made the "Ella Pearl" sign - she's so talented - it really made it unique. 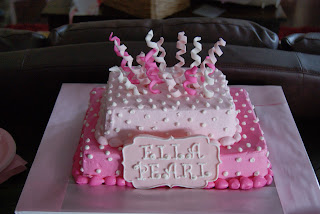 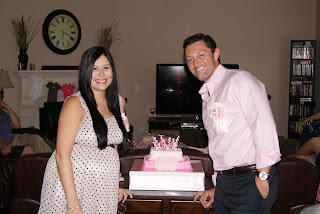 After all the official festivities were over, we relaxed and hung out with a few of our closest friends. We even had story time with our new book "Go the F to Sleep" with Philip and I taking turns reading aloud. It was a great laugh and great end to the shower. We're so fortunate to have so many friends who are just as excited for Ella's arrival as we are. 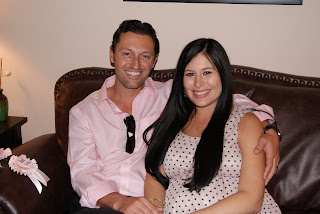 I've been making weekly doctor visits for the past month. The past two weeks I've been 1cm dilated. This week I'm 1.5cm, almost 2cm and Ella is properly positioning herself to come soon.

My due date is now back to September 25th. My doctor has "no idea" where she would have gotten the 29th from. This makes me feel as though she is extremely flaky, making these due date mistakes, telling us one thing and then another and then back again. There was no reassessment due to my physical condition. This simply was a mistake/miscommunication. I just can't figure out HOW that happens...she's so put together and professional otherwise. While an exact date is not a big deal because of course it's not an exact science, it does affect the decision of timing on the off chance we need to induce because she is not coming on her own.

My doctor seems very confident I will naturally go into labor and says I'm tracking well for my due date. We do need to be prepared, though, just in case, so Philip and I need to decide what the deadline is for waiting and the date we'd go to the hospital so I can be induced. While my doctor recommends only going a week past my due date, she seems flexible to allow for longer than that. October 9th is exactly 2 weeks past my due date and as far as any doctor would let me go. We haven't discussed the date yet and I feel we may end up with a compromise...not 2 weeks, but maybe a little over a week as I want to give Ella the time to come naturally.

I write this blog post at 4:30 in the morning, due to waking up at 3am for my nightly bathroom break. I'm always parched and drink some water before climbing back into bed and lightly falling back to sleep. But this time there was no water at my bedside and after going downstairs, dealing with a calf muscle cramp as I woke up and making sure the dogs were as quiet as possible, I'm awake after an hour of trying to sleep again.

Now at the end of my pregnancy, these types of occurrences are less and less rare. I wake up once in the middle of the night to go to the bathroom. I don't sleep well in the morning - it's light, dreaming, erratic sleep that does not leave me well-rested. Along with sleeping issues, my mobility is definitely limited - I think pretty hard whether I want to sit and slouch down on the couch because it's not the easiest task getting back up. I stopped wearing heels permanently mid-August; my feet were getting just too swollen by mid-day and who wants to see that anyway in a cute pair of heels? My Nike flip-flops with great cushioning have become my new favorite shoes and are definitely showing the wear of that. An itchy stomach (who knew that was a symptom?!), shortness of breath from lungs being crushed and a very achy neck, shoulders and back are a few of the other wonderful parts of being almost 9 months pregnant.

My entire pregnancy has been pretty smooth sailing, though. I suppose if I didn't have any discomfort, at least at the end, that would be very weird. My only worry is that when I finally can wear all my fabulous heels again and dress in my regular clothes, where am I going to go? The grocery store?
By: Kiana 1 comment:

I am 36.5 weeks pregnant. We officially have less than a month to go before Ella's due date. My belly is.....big.

It's funny walking around my office building, my client's office building and being out-and-about on the weekends running errands. I've never received so much attention from strangers before in my life - forget low cut tops in college, all you need is a big pregnant belly and all eyes are on you - men and women! It's like they can't help it. They don't try to hide it either - they deliberately look at my large stomach. It's as if they feel it's ok because it's not a permanent state that I am in like being morbidly obese or having a deformity - it's a special, temporary state, so, suddenly it's ok to stare.

People automatically smile at you when they notice your huge stomach, whether they're simply passing you while walking and see you coming for a while or if they suddenly look up in the store and you're near them - instant smile flash. I've wondered what exactly about my appearance makes this reaction so instantaneous, so genuine. I don't think it will be the same once we're actually carrying the baby in the outside world. It's as if there's this quick moment of reality that sets in of the grand sense of life..."That woman is going through months of carrying a small, new human inside of her body. She's procreating. She's what makes our race, the human race, keep going." That's how deep I feel these strangers' enthusiastic and penetrating reactions are to seeing me at this state in my pregnancy - it's constant. They really shouldn't because it inflates my ego. I am very, very important - I am carrying LIFE.

Not only do I receive countless, non-conversational smiles, but people feel compelled to talk to me about my pregnancy. Usually they simply ask when I'm due and/or what I'm having, a boy or a girl. Everyone is so curious and so interested in me. While I'm used to seeing myself everyday, I suppose I have to remember that the majority of the population does not see over 8 month pregnant women all the time. Most of the time women engage me - ones who appear older, who have all most definitely have had kids before themselves (trust me, you can tell by the knowing look they give you), but some men have engaged me as well. I feel very popular, like I have something great that other people don't have right now - but it's different than the stereotypical high school sense of popular. These people aren't jealous of me. It's popular in a nice, good way. People like me, even if for just the quick moment of communication we have. I believe they feel connected to me in some way - they're comfortable. I've gotten a random hug and belly rub from two separate strangers. I want to tell them "Why are you touching me?? I don't know you!" but they are just overly kind and I don't think they're thinking. You wouldn't normally go up to a stranger and hug them or touch their stomach, would you? No.

So I have many more encounters than in my pre and mid-pregnancy life with people I will never talk to or see again about this all-important impending event in Philip's and my life. It's as if I'm sharing this little piece of me over-and-over, telling the same information to different people. "I'm due end of September."; "I'm having a girl."; "Yes, I'm beginning to be ready for it to be over."

Should these people not be strangers or rather, should they be in my head, more meaningful and truthful conversation would entail...

"You know, I don't think about being pregnant every waking second of my life. I do feel like myself - it's still MY body. Sure I constantly recognize all the annoyances, but that's just my reality right now. I am simply someone who struggles to bend down towards the end of the day when I have less energy. I am someone who has to strategically think of the best way to take off my jeans and get into my very high bed at night. I am someone who struggles to shave my legs and thus, do it less often. My stomach is a source of inconvenience in my life right now. I know that, but I don't dwell on it. It just is. I don't know anything different right now. Will I be excited to lay on my stomach while sleeping and for massages again? Most definitely. Do I look forward to being able to breathe normally? Move normally? Look normal? Not have swollen feet? Yes, yes, yes and yes. But I have to wait...just like every other pregnant woman there ever was in the history of the earth. And I am ok with that."
By: Kiana 1 comment: